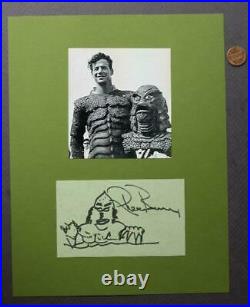 Here's an 8 1/2" tall by 11" wide AUTOGRAPHED HAND-DRAWN sketch of the Creature from the Black Lagoon signed by the man who played him Ricou Browning-The item features a 5" wide by 3" tall green card with the original artwork AUTHENTICALLY HAND-DRAWN & AUTOGRAPHED & signed in black ink and is tipped to a larger green backer with a photo of Mr. Browning in his costume from the movie on front.

What a great vintage item with a 100% authentic signature! This is an ORIGINAL item, NOT REPRODUCTION item!

Creature from the Black Lagoon Star Ricou Browning signed autograph sketch RARE! Here's an 8 1/2" tall by 11" wide AUTOGRAPHED HAND-DRAWN sketch of the Creature from the Black Lagoon signed by the man who played him Ricou Browning. The item features a 5" wide by 3" tall green card with the original artwork. D in black ink and is tipped to a larger green backer with a photo of Mr. Browning in his costume from the movie.
Here's some info on Mr. Ricou Browning (born February 16, 1930) is an American film director, actor, producer, screenwriter, underwater cinematographer and stuntman.
He is best known for his underwater stunt work, especially in the 1954 film Creature from the Black Lagoon, in which he portrayed the titular Gill-man during the film's underwater scenes (actor Ben Chapman played the Creature on land). Browning reprised the role for the underwater scenes in the film's sequels Revenge of the Creature and The Creature Walks Among Us. He is the last surviving original actor to portray any of the Universal Classic Monsters. Browning also co-created Flipper with Jack Cowden, and directed a number of episodes of the 1960s television series. Browning made his feature film directorial debut with Salty (1973), which he also co-wrote with Cowden, and went on to direct Mr. Browning directed the underwater sequences in 1965's Thunderball, the fourth James Bond film by Eon Productions, as well as the Bond film Never Say Never Again (1983). He also directed the underwater scenes in the comedy films Hello Down There (1969) and Caddyshack (1980). A Florida native, Browning was inducted into the Florida Artists Hall of Fame in 2012. Browning was born in Fort Pierce, Florida. He was a major in physical education at Florida State University. Browning started a career in water shows, moving on to produce shows. Browning worked at Wakulla Springs in the 1940s and learned to perform in underwater newsreels conceived by Newt Perry, who later took Browning along when he opened Weeki Wachee Springs. While working at Wakulla Springs in 1953, Browning was asked to show around a film crew scouting for shooting locations. According to Browning, Their cameraman asked if I could swim in front of the cameras so they could get the perspective of the size of a human being against the fish and the grass. Days later, the crew offered Browning the role of the titular Gill-man in the film Creature from the Black Lagoon (1954). Browning accepted, and played the Gill-man in the film's underwater scenes, while actor Ben Chapman played the monster on land. During filming, Browning reportedly held his breath underwater for up to four minutes at a time. Browning reprised his role as the underwater Gill-man in two sequels, Revenge of the Creature (1955) and The Creature Walks Among Us (1956). He continued in movie production and joined Ivan Tors' studios in Florida, where he co-wrote and co-produced the 1963 film Flipper (about an intelligent bottlenose dolphin). Browning continued writing for the subsequent Flipper television series that debuted in 1964. He directed the underwater sequences in Hello Down There (1969), and directed the family film Salty (1973)[9] and the cult film Mr.

He also worked as second unit director, stunt coordinator and underwater sequence director on a number of features, including Thunderball (1965), Around the World Under the Sea (1966), Island of the Lost (1967), Caddyshack (1980), and Never Say Never Again (1983). However, if the items are heavy or require special packing / tracking, the postal rates might not be significantly reduced. We pack every item professionally using new packing materials and appropriate mailing supplies.

We send all items via US Postal Service. I think you'll find that we're quite fair.

I try and place a penny in every photo to help judge the size of the item, obviously it is there for size comparison and is not included with the item. The standard sized Lincoln head penny in the photograph is there for size comparison ONLY and is not included in the package. We're just trying to help you figure out how big the item is. We try and always be as accurate as we can in the item.

Description and will gladly answer any question about item size & description when needed. Postal service and is never refundable. Many of the items are VINTAGE and although they are in very fine condition, they may not function as well as when they were made decades ago.

In other words, if you intend on using a 50+ year old letter opener and it breaks, don't get mad at us. It may be hard to believe, but we have received a couple negatives because people broke vintage items while trying to use them. We comb the antique stores & malls as well as Antique shows & flea markets from Coast-to-coast in an effort to try and find that special addition to your collection. We travel hundreds of miles and wake up with the sun in search of these items. We truly have a love for our hobby / business. We generally charge the same postal rate that the US Post Office charges us. We'll respect you, but please respect us as well. Get Supersized Images & Free Image Hosting. Create your brand with Auctiva's. Attention Sellers - Get Templates Image Hosting, Scheduling at Auctiva. This item is in the category "Entertainment Memorabilia\Autographs-Original\Movies\Other Orig. The seller is "ghost-train65" and is located in this country: US. This item can be shipped to United States.