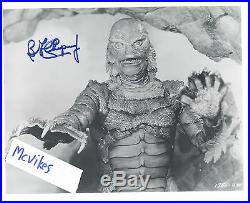 was an American actor best known as playing the Gill-man. In the 1954 horror film Creature from the Black Lagoon. A distant relative of fellow actor Branscombe Richmond. He also appeared in Wake of the Red Witch.

He spent much of his childhood in Tahiti. And moved to San Francisco.

At age 12 or 13. Veteran of the Korean War. He was believed to have earned a Silver Star. For battle injuries in his legs.

However, after his death, the Marine Corps Times began an investigation of these claims based on the improbability of the claim of receiving two Purple Hearts for the same campaign. Information from Marine Corps records, which were received a month after obituaries with the claims awards of valor and of serving at the Chosin Reservoir, reveal that Chapman did serve in Korea.

The Marine Corps Times reports that, "according to Marine Corps officials and a copy of Chapmans military Report of Separation", Chapman did received the Silver Star, Bronze Star and two Purple Hearts. Before he became the Creature he worked as a real estate executive.

Chapman was selected as the Gill Man due to his large size at 6'5. His famous suit was made out of a foam-rubber body suit and a large-lipped headpiece. He cited horror film predecessors Lon Chaney Sr. In "Phantom of the Opera" and "Hunchback of Notre Dame" in the 1920s, Bela Lugosi. In "Dracula" and Boris Karloff. In "Frankenstein" in the 1930s, and Lon Chaney Jr.

In "The Wolf Man" and "The Mummy" in the 1940s as inspirations to his character. In a 1993 interview, Chapman explained that there were really two actors who played the Gill Man. He was the creature on land; Ricou Browning. Was the actor in water sequences.
However, Chapman was the one who participated in Creature related events. Ben Chapman died shortly after midnight on February 21, 2008 at the Tripler Army Medical Center.

His son Ben Chapman III stated that he had... Heart problems [and] breathing problems. Other survivors include his wife of 25 years, self proclaimed "Mrs Creature" Merrilee Kazarian; another son, Grant Chapman; stepdaughter Elyse Maree Raljevich; sister Moea (Harry) Baty; and "several" nieces and nephews. Chapman's ashes are to be scattered off Waikiki. Ilene Wong, co-producer along with Wayne Maeda of the Hawai'i All-Collectors Show which Chapman attended from 19992007, said that he was.

Always very happy and so giving. People would ask him about the movie, or Hollywood, and he would always provide the answers, help out.

Ben would bring his briefcase and inside he had his memorabilia posters, 8-by-10 glossies and a good pen for autographs. In fact, we expected him this year. I think we will make a shrine for him.

The item "Ben Chapman Creature from the Black Lagoon bw Autographed Signed 8x10 Print COA" is in sale since Monday, April 28, 2014. This item is in the category "Entertainment Memorabilia\Autographs-Original\Movies\Photographs".