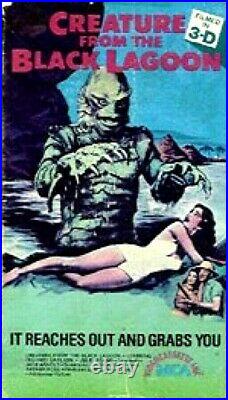 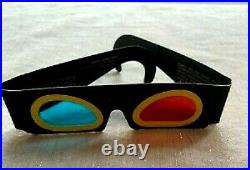 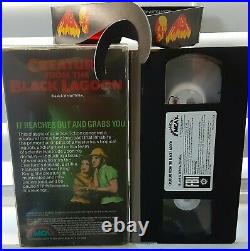 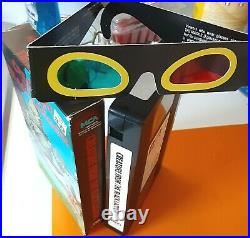 Okay viewing item from personal collection. Rare video collectible First Edition from MCA, Complete & Uncut, with Original 3-D Glasses from 1989 Rhino Video release of THE MASK. TAGLINES : It Reaches Out and GRABS YOU! " "Creature from a million years ago!

Every man his mortal enemy... And a woman's beauty his prey!
ONLY Official Factory Studio Release in ORIGINAL 3-D format - Pair of 3-D Glasses included! A scientific expedition searching for fossils along the Amazon River discover a prehistoric Gill-Man in the legendary Black Lagoon. The explorers capture the mysterious creature, but it breaks free. The "GILL-MAN" begins to attack the humans after they invade his quiet habitat, but falls prey to the charms of the female research assistant whom he tries to spirit off to his underwater hideaway.
BEHIND THE SCENES TRIVIA : Two different stuntmen were used to portray the creature, and therefore, two different suits were used in the movie. Ricou Browning played the creature when it was in the water and wore a lighter suit, Ben Chapman played the creature when it was out of the water with a darker suit.

They didn't meet until they both attended a convention in Florida 20 years later. A severe accident was narrowly avoided while filming the fight scene between the creature and Zee. Ben Chapman, the stuntman who acted as the creature on land, and Bernie Gozier, who played Zee, rehearsed the fight scene for several days.

There was a particular need for the extended rehearsal since the creature costume allowed for very little mobility or visibility. The scene called for Zee to swing at the creature with a machete and for the creature to grab his hand before he could complete the motion. When the scene was filmed with the actors in costume, Chapman missed Gozier's hand when he swung the machete at him.

The blade connected squarely with the creature's head. Luckily, the machete was not extraordinarily sharp and the thick rubber foam that formed the creature's head prevented Chapman from receiving any serious injury. Ackerman, the horror and science fiction creator of'Famous Monsters of Filmland' Magazine, bought the mask and claws of the Creature's costume from a young man who had once used them as a Halloween costume.

The costume pieces were discarded by Universal after production had finished on the three films (Creature from the Black Lagoon and its two sequels) and were later recovered from the studio's dumpster by a janitor, who thought the ensemble would make a good Halloween costume for his son. CREATURE FROM THE BLACK LAGOON was the very first film that Stephen King can remember seeing as a young child. The'impression' it left apparently inspired his one and only'imagination' as a fantasy and horror writer.

Watch for early performance of future superstar, CLINT EASTWOOD, as a lab assistant. Some images may be representative.

The quality of playback and visual presentation is GOOD to VERY GOOD to FINE. Some items may be Brand New Factory Sealed, while a few may slip through in a lesser quality. These items are inspected but individual items slip through occasionally, and we apologize for this inconsistency.
The item "Vhs CREATURE FROM THE BLACK LAGOON 1954 3-D withGLASSES UBER RARE MCA Julie Adams" is in sale since Tuesday, January 12, 2021. This item is in the category "DVDs & Movies\VHS Tapes". The seller is "hardtofindrare" and is located in Wake Forest, North Carolina. This item can be shipped to United States.