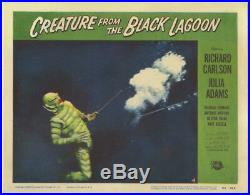 One of the Best cards in the set of eight, with striking closeup of the Creature being Harpooned. Has been professionally paper-backed after minor restoration to the border area. Very rare and highly desirable lobby card! CREATURE FROM THE BLACK LAGOON LC #4 1954 cool image of monster shot underwater with harpoon! Film Description: Creature from the Black Lagoon, the classic 1954 Jack Arnold Universal 3-D (3D; 3-Dimension) science fiction (sci-fi) monster horror thriller Sheer, stark terror grips you in underwater...

3-D"; "Terrifying monster of the ages raging with pent-up passions! With every man his mortal enemy... And a woman's beauty his prey!

"; "Centuries of passion pent up in his savage heart! "; "Monster from a million years ago! "; "CLAWING MONSTER FROM A LOST AGE strikes from the Amazon's forbidden depths! 3D" starring Richard Carlson, Julie Adams (billed as "Julia Adams), Richard Denning, Antonio Moreno, Nestor Paiva, Whit Bissell, Ricou Browning (who played the Gill Man underwater), Ben Chapman (who played the Gill Man on land), and Bernie Gozier. Note that the inspiration for this movie began when William Alland (the producer of this movie) was playing an acting role in "Citizen Kane", and he learned of a myth about half-man half-fish creatures in the Amazon. He wrote notes for a story called "The Sea Monster" in 1951, combining the above myth with the "Beauty and the Beast" story. In December 1952, a 59-page treatment called "Black Lagoon" was written by Maurice Zimm and Leo Lieberman wrote a script based on that treatment in early 1953, but Universal turned it down.

After this script was written, a new script was written by Arthur Ross and Harry Essex, and that was the script that was used for the movie as filmed, and the last great Universal monster was created! Finally, note that the wonderful creature costume was created by a woman named Milicent Patrick, who you probably never heard of, but she deserves to be well remembered. She was a top pianist as a young girl, and she graduated from high school at 14.

She went to work for Disney as an artist in the animation department in the late 1940s, and she was the first female hired by Disney in that capacity. In 1954, she designed the classic creature costume used in this movie, but the head of the makeup department did all he could do to keep her from getting proper credit, and as a result, she left Universal. It is said that she also created some of the well known costumes in other Universal horror and sci-fi movies preceding this, but there is no clear record as to which ones (but some great monsters of this time, including the ones in "This Island Earth", seem to be unmistakably her design). She turned to acting, appearing in a few movies and on TV, but she pretty much vanished in the early 1960s. Some people think she passed away in the late 1970s, and others suggest she could even still be alive! She certainly deserves massive credit for her contributions to this movie and other great 1950s monster movies, but that may never happen. Important Added Info: note that this lobby card has been paperbacked. This means the lobby card was backed onto a very light paper backing (acid-free), that keeps the "feel" of the lobby card similar to that of the original lobby card. Some restorers prefer to paperback lobby cards on to a heavy backing, while others prefer to use a very lightweight backing.

The advantage of a lightweight backing is that the card still "feels" like a regular lobby card, but a heavier backing makes restoration easier to do and less noticeable. Prior to paperbacking, the card had paper loss in the top left corner that extended into the "CR" of the title. It had pinholes in the other corners. It had some small tears and smudges around the edges and some smudges and scuffs in the image. Overall, the lobby card was in good condition prior to paper-backing.

The card was well backed and looks great! The item "Creature From The Black Lagoon Vintage Horror Lobby Card 1954" is in sale since Thursday, March 19, 2020. This item is in the category "Entertainment Memorabilia\Movie Memorabilia\Lobby Cards\Originals-United States\1950-59". The seller is "cvtreasures1" and is located in Saint Augustine, Florida.