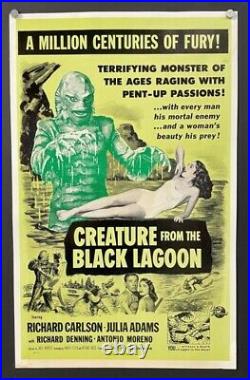 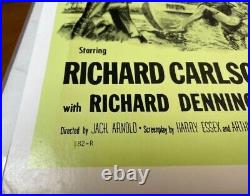 Tarring Richard Carlson, Julia Adams, Richard Denning, Antonio Moreno, Nestor Paiva, Whit Bissell, Ricou Browning, Ben Chapman. The Benton card company made occasional window cards for theaters from the 1930's to the 1960's. They were distinctly different from other window cards due to the type of paper they used and their use of mostly a two color process.
In the 1980's, the Benton Card Company started to reprint from the original plates, some of their more famous window cards from prior years; this is an example from that printing. This is not a photocopy, but is an original 1980's reprint from the company. Not to many 1980's reprints were made, as they found minimal demand for them at the time. The window card is in excellent, unused condition and the artwork is fabulous.

There is a number in the bottom left corner which I assume is Benton's production number. It appears at some point someone scratched out one of the numbers as the number is suppose to be 782-R. I have thousands of titles - from the 20's to the 90's - so submit your want list!! You are purchasing an original movie poster from the collection of Sue Heim, owner of Hollywood Poster Frames. I have been a collector for over 48 years. I also created one of the first collector shows for original movie posters and memorabilia in southern California in the early to mid 1980's. As the owner of Hollywood Poster Frames, my company has done the framing for the studio's, academy's, production houses and private collectors all over the world for over 35 years. I have a vast collection of original movie posters so please feel free to send me any questions or lists of titles you may be looking for.

Thank you - Sue Heim. This item is in the category "Entertainment Memorabilia\Movie Memorabilia\Posters\Originals-United States\1980-89".