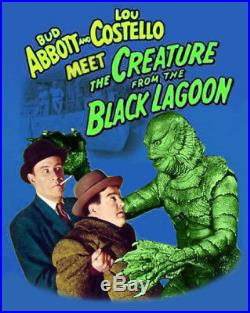 This listing is for a Super 8 Sound print of ABBOTT & COSTELLO Meet THE CREATURE FROM THE BLACK LAGOON, 400' B&W, Sound. For the real connoisseur, this title is extremely rare in film format, especially Super 8. It was originally televised in 1954 as a skit on the Colgate Comedy Hour, introducing Universal Picture's latest monster. Thankfully, it was filmed as a kinescope for west coast broadcast, otherwise this piece of A&C history would be lost today. The print is a copy of that kinescope, so it derives the same characteristics (ie, a film recording of a TV broadcast). It is in excellent condition overall, having always been in an adult collection. It was tested on an Elmo projector and runs fine with no projection issues and great sound. The film is about 325' long and comes mounted on a 400' reel. It may be a long time before this title comes up again in Super 8 Sound! On consignment from a long-time collector. The item "Super 8 Sound ABBOTT & COSTELLO Meet THE CREATURE FROM THE BLACK LAGOON Rare" is in sale since Saturday, September 8, 2018. This item is in the category "DVDs & Movies\Film Stock". The seller is "vintagetoy" and is located in Upstate, New York. This item can be shipped to United States.