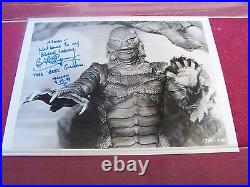 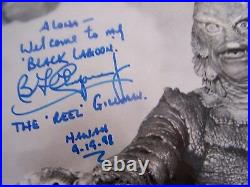 Get Vendio Gallery - Now FREE! Ben Chapman-The Original "Creature From The Black Lagoon" Autographed 8x10 Photo. This photograph is even more special when you learn that there were two, yes, two "Gillman" character actors.

Ben Chapman was the first and the one most known for his role in the movie. As I was told, Ben asked for a substantial increase to his contract if he was to reprise his role as the Gillman.

" The studio decided they would not do that, and because no one could see the actual face of the creature they hired a second "Gillman, and let Ben Chapman go. This photograph is the only one of it's kind that I have seen signed by Ben Chapman, and I have no doubt as to it's value now!

A long time has passed since the last "Lagoon" picture, but the wounds still seem to be there. I also have another photograph from the movie, and it is signed by John Agar, the guy who got the girl in the movie.

But, let me tell you something that still rings in my mind, and that is that when they showed the gillman creature swimming directly below Julie Adams I thought that was such a sensual scene. I don't know if that was the plan on not but it sure seemed to resound with a lot of young mem I knew at the time! Additionally I have a letter from Ben Chapman discussing the movie and the "players" And was is the final piece to tie it all together is the fact that I have a verified copy od the orinal "Gillman" contract as signed by Ben Chapman. I will wrap this POSTER extremely well, as I always do, and I will send it to you securely wrapped in a NEW reinforced mailing tube marked FRAGILE-Do not Bend! Especially with all the changes at the Post Office! We guarantee your satisfaction on every item we sell.

This item can be shipped to North, South, or Latin America, all countries in Europe.